YouView - Freeview: the Next Generation - launches

A couple of years later than expected, the YouView service was announced today. When you plug a YouView box into your TV set, it will combine a Freeview+HD receiver and recorder with BBC iPlayer, ITV player, 4OD and Demand Five.


Lord Sugar, who once stood on the platform at the announcement of Sky Television back in the 1989, is once again pronouncing the future direction of television. This time he is at the London Film Museum with the BBC, ITV Channel 4, Channel 5, BT, Arqiva, and Talktalk to show the internet-connected Freeview boxes off. Sky will also be adding their Sky Now service shortly, and STV programmes will be added soon.

"Itâ€™s with great pleasure that we announce that YouView will be available from major retailers later this month. Our intention with this simpleâ€“to-use box is to provide extraordinary TV for everyone, with on-demand services combined with TV channels with an opportunity to search back an entire week to catch what theyâ€™ve missed. Itâ€™s a whole new way of experiencing TV." said Sugar. 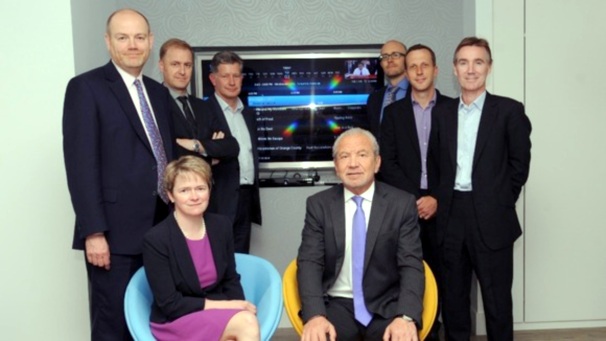 The boxes will start at £300. This is quite a lot more than other similar boxes, such as those from Apple (Apple TV, £99) and Google (Google TV, £199). It will also be possible to get a subsidized YouView box as part of a BT or TalkTalk broadband deal.

However, YouView will, uniquely, show the traditional EPG grid, but with the ability to set future programmes to record, and past programmes to stream.

Richard Halton, the chief executive of YouView adds, "In many ways weâ€™ve only just begun, YouView is set to evolve quickly and we look forward to working with new content partners and developing more functionality as boxes roll out into UK homes.â€


Help with
[][][
In this section
Comments
Dave
sentiment_satisfiedSilver
1:29 AM
Brighton
I am sure that in the future something like tvcatchup will be available on youview, give it time the box is not even on the market yet

Dave's 126 posts
G
Geoff. Dixon
5:48 PM
To : Brian Butterworth
Have you done an article on setting up a Broadband Ring-main? With the advent of "You View", this may be the only way to get the signal within a short distance of their DTV sets !

If people require a broadband connection where there isn't one, then they should use WiFi or a Cat5 cable.

ed's 2 posts
Dave Lindsay
sentiment_very_satisfiedPlatinum
11:48 PM
ed: It is a bit late for that.

It comes down to the fact that when the that the licencees weren't mandated to provide as full a coverage as the Public Service Broadcasters.

Terrestrial television covers around 98.5% of the population. The cost of transmission for the last 8.5% is about the same as that for transmitting to the 90% who do get the full service.

The Commercial broadcasters (those that don't transmit from "Lite" stations) decided to stick with the 81 biggest transmitters (biggest by viewer population). They operate purely for profit by showing advertising that they sell to as many viewers as possible which they wish to aquire at lowest possible cost. Thus doubling their cost of transmission whilst increasing their potential viewerbases by about 10% doesn't make any sense. This is the basic law of capitalism: if it isn't likely to produce a return, it doesn't get done.

The Commercial broadcasters operate for the benefit of their shareholders in just the same way as any company.

Dave Lindsay's 5,724 posts
R
Rob
sentiment_satisfiedSilver
7:12 AM
I Have YouView Humax box wearing B.T logo got it cheap before they released the smaller BT Youview box got it from Richer Sounds for 129. I am very happy with it works very well with my Bang & Olsen Tv that i got for 99p from Ebay.

The recording with Subtitles is very very good very reliable as my previous box kept dropping out the subtitles... they strange thing is no loss of signal or anything weird. I feel the Humax box got a decent tuner and stays locked on. The old box was a cheap Vestel brand... it does pay more for better box.

Rob's 171 posts
J
joe
11:57 AM
i havea triax t2 hd 217pvr when i retune i can pick up all the stations but when i tune in to any one above 800 theyi just loose them again but all the rest is ok wy is this happening